Who Has the Guitar? We Need a Farewell Song… 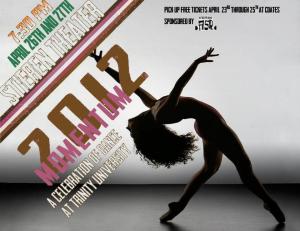 I feel like I’m being watched when I perform. But I can’t see past the stage lights, so maybe I’m just imagining things….

Since this is personal opinion, I believe safe to say that I really enjoyed this class. The different videos we watched, the projects, the discussions. From reading Animal Man to making our own trailers, I will certainly see this course as time well spent. As for next semester, I foresee more Communication courses in my future! Going for that major, so what else am I gonna do? In particular, I’m taking Visual Communication, so thank you Delwiche for having us use Premiere. I at least know that I have some skill in using that program for the coming Spring. Next semester is actually going to be a little light for me since I am an Associate Producer for the dance show put on at the end of the academic year, Momentum, happening in late April (shameless plug, hope to see you all there). So I’ll thankfully have a bit more time to devote to making sure that goes well. Which, of course, means I am not going abroad. I sadly think I will not be able to check that off my list of things to do before I graduate. Boo. If the Mayans prove to be right, though, I’ll at least go out in a style at a party with friends on December 20th. But then there’s the whole Gregorian calendar switch, so I think that ship has sailed a long while ago.

I honestly don’t think I can talk about reading related to aesthetic properties
of media without talking about how the Food Network is connected to porn in
Kaufman’s “Debbie Does Salad.” Never before had I even considered much less
thought to think that the two could one in the same. At least in how are they
filmed and portrayed. Seeing how McCloud talked about where different art forms
could lie on the scale between pictures and words was also interesting. I didn’t
think before to see different styles as leaning one way or the other in the way
that he explained. I simply saw them as different comic book artists using a
style they were comfortable with or what they felt fit the story.

One theoretical idea I found interesting was when Morrison discussed the notion of
the multiverse that is present in both the Marvel and DC Comics houses. While I
was previously aware that there existed different scenarios and how the lives
of fictional characters could play out, it was cool to see how the same idea
could be applied to reality and wonder if the same concept was actually present
in what we perceived to be the only reality. To think that, like it is for
comics, we are just possibility of many is rather daunting. I would like to make my second reference to reading, “The Virus,” when Rogin equated aliens to be motherly. While I can now agree that this probably has a lot of truth to it (the Independence Day aliens looked like straight-up fetuses), I was still a tad odd to read his theory on how sexuality was handled with different characters of the film in the same sitting: “ID4 rescues race from homosex.” Kind of a strange turn there, Rogin.

Now, let us address the hypothetical scenario at hand: I receive a package containing several photos of myself, which I never knew were taken mind you, showing me doing different things around campus throughout the semester. The question is: What is the meaning of this package? I see this as meaning that, contrary to what we may think, but still probably lining up with how we hope we consider in everyday life, we are being watched. People do see us and they, in some way, document what we do. To someone else, we are a story that is continually unfolding, never really set on pause. Much like Buddy in Animal Man, we are a character that is seen in different settings with other people probably making up stories of their own to explain our actions that they don’t understand. Also, I have a stalker.  I would ultimately hope, though, that these pictures are from a friend of mine taking completely candid pictures of me that I don’t expect and will ask, “When did you take this?!,” to get back at me for all of the random pictures I’ve taken over the past couple of years. One can only hope.

This entry was posted in Blog #6. End of the semester and tagged college, communication, future, reflection, thoughts. Bookmark the permalink.