I feel a bit odd when writing this blog posting as it is just hard to believe that this semester is coming to an end. It is even more surprising to realize that I’m now planning for my last semester at Trinity. If the world will end in December 2012 then I’m glad that I will die in my homeland, Vietnam. If not, I will have to handle a heavy workload next semester to graduate with two majors. I will have to finish my Computer Science thesis, take three Economics classes and two more Common Curriculum classes. However, I’m really excited about my plans after graduation. I intend to work in the US for at least one year before going to graduate school. Actually, I think I’m excited because I will be able to explore different career paths. Youth is to try and to try again. I’m curious to see how I will be like 10 years from the time I wrote this blog posting.

In Scott McCloud’s Understanding Comics, I’m surprised to know that McCloud also thought that the whole world was designed to just nurture him. I did think the same thing and worried that I was too egoistic. But who knows that it is untrue? As our perception of reality is based on faith, it is currently safe to assume that the world has existed to support me. Also, the idea that “elements omitted from a work of art are as much a part of that work as those included” in his book is really interesting. It probably explains why Dr. Delwiche picked the book White space is not your enemy for our class. White space can be useful in graphic design as silence can be useful in music. The most important thing is that we have to learn how to use them appropriately and creatively.
The concept of meme in Susan Blackmore’s The Meme Machine is also a noteworthy one. Along with genes, memes exist in our life to define people. It is surprising to know that memes behave like genes, therefore, they deserve our attention to focus on some that strongly affect our lives. Next, I find David Icke’s conspiracy theories involving reptilians particularly interesting. Although they don’t seem to make sense for most people, they are vivid examples of how seemingly ridiculous theories can survive well if they could not be disproved. The fact that people still have to talk about them does indicate that they are successful at explaining things reasonably well.

Dr. Delwiche Has Lost His Mind

It may be true since no one disproves it yet. However, I think Dr. Delwiche does want us to realize that we too have lost our minds after taking this class. This class is supposed to change the ways we interpret things and come to realize that everything happens for a reason. The package I received is not an exception. It comes from Anaheim, CA, where Disneyland is located. In Steve Shaviro’s reading, Disneyland refers to something that is not real. Next, I’m a bit frightened that Johnny B. has secretly followed me and taken those pictures. However, as some of them come from The Truman Show (Peter Weir, 1998) and Grant Morrison’s reading, I think I got his message. What if “it’s all just metafiction?” In this class, we have learned to question the reality. However, what is the point of doing it? I believe that we should get used to critically think about everything that happens, including the existence of ourselves. Don’t just accept it. Instead, try to understand it. Look it up if necessary. Our ability to think is one of our greatest strengths. Just think until we seem to lose our minds! 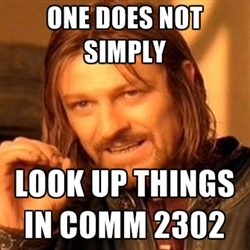 Remember to look things up if necessary!

This entry was posted in Blog #6. End of the semester and tagged look up, metafiction, reality. Bookmark the permalink.