The Hellbook….was hell to watch, really.

Good God, if I have to sit down and watch scenes from The Notebook (Cassavetes, 2004) one more time, I might just loose it. Running out of time and being forced to resort to borrowing a DVD from a chick-flick loving friend, I decided to remake The Notebook from a lovey-dovey film into an action/horror film. Little did I know, the horror would begin just by watching the original movie. Did I mention that I did not enjoy watching the movie? 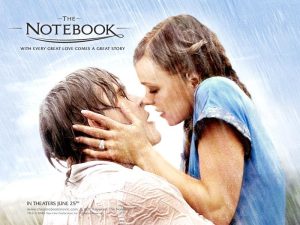 The cover for The Notebook DVD. I’m getting sick just looking at it.

Making the recut trailer, there were a few notions that I tried to keep in mind. One was that I would need to elicit fear from a scene that has nothing but love. To do this, I realized that I would have to cut scenes extremely short, and then mush them together. This was a montage, which, according to Dick, is “a series of shots arranged in a particular order for a particular purpose”(Dick, 2002, p.14). My use of the montage sequence also assisted me in staying true to Hitchcock’s understanding of trailers. Hitchcock felt that “trailer[s] must be a work of seduction and suspense”(Gilbey, 2006, p.43). By keeping short, quick scenes, I was able to build a type of suspense. Short scenes of people crying and screaming cause suspense to arise, and the viewers do not have an clue as to what actually will happen in the movie.

Another notion that I wanted to keep in mind was that I wanted to include as many signifiers to horror films as possible. One common theme among horror movies is that of the haunted house. In my trailer, the house that the couple enters into just as things start to go wrong serves to develop iconography. Sobchack defines iconography as “certain…places composing the visible surface of a genre film which creates economically the context and milieu”(Sobchack, 1975, p.199).

Throughout the course of this project, I ran into a few difficulties. I’m not sure if I’ve mentioned my hatred for the film The Notebook, but just to clarify, The Notebook was almost comparable to torture for me. Another frustration that I ran into was the difficulty of finding scenes in which there was no background music. At certain times, there were great scenes with amazing dialogues that could have assisted my recut, however the background music from the movie rendered those dialogues unusable. Another difficulty that I had to overcome was figuring out the correct output format for my film. Because the movie that I had chosen was imported at a lower resolution, the suggested output format didn’t work and caused my trailer to be shaky. After getting some help from classmates, the solution was easily discovered.

Overall, this was a great project. It definitely was much more enjoyable when spread over a period of time, rather than doing it all the night before the due date.